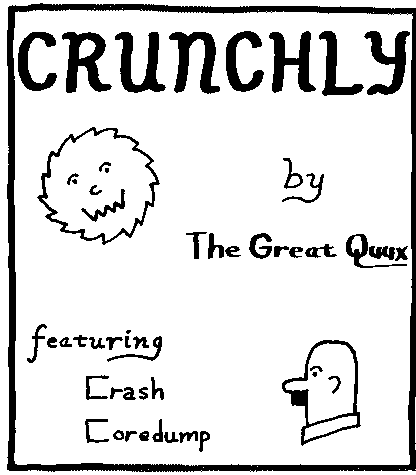 I registered quux.org in 2000 when I started getting interested in the ways old (and often forgotten) technology could still have a lot of contemporary value. It wound up hosting my Gopher site to begin with, thinking “if I’m going to host some obscure old technology here, why not do so with an obscure old name?”

quux.org is hosted on the same machine as complete.org, and so the decision of which DNS zone to use for which service is purely arbitrary. In general, I have put things roughly web-related under complete.org and everything else under quux.

Links to this note

At quux.org, I operate a heavily-peered Usenet server. It peers with others on the Internet using conventional NNTP. Moreover, I also offer partial and full Usenet over NNCP feeds. quux.org carries a full set of text newsgroups, and no binaries.

Complete.Org is a personal project managed since 1994 by John Goerzen.

These sites are hosted on the complete.org server. Some are hosted with resources donated to non-profit organizations.

Usenet, of course, originally ran over UUCP in quite a few cases. Since NNCP is quite similar to UUCP – in fact, you can map UUCP commands to NNCP ones – it is quite possible, and not all that hard, to run Usenet over NNCP. In fact, in a number of ways, it works better than Usenet over UUCP!

I am a programmer, manager, hobbyist, advocate, volunteer, dad, and nature lover. I live out on an old farmstead in rural Kansas that once belonged to my grandparents. The nearest paved road is about 3 miles away, and the nearest town (population 600) is 7 miles away. I have three incredible children, which I might occasionally mention on my blog.